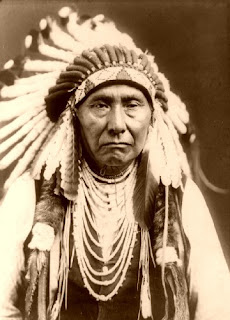 In 1855, Joseph the Elder and other Nez Perce chiefs, signed a treaty with the United States, in which the Nez Perce were given a researvation with 7.7 million acres of land in present day Idaho, Oregon and Washington.

However, the treaty was broken by a great influx of White settlers who were searching for gold and land. In 1863, the United States government representatives called another council to create another treaty for a lot less land that was only 780,000 acres around the Idaho city of Lapwai.  Some of the Nez Perce chiefs signed the new treaty, but Chief Joseph, the Elder, and some others did not.

Chief Joseph, the Elder, asked his son to promise him that he would not allow the United States government to take over his lands.  Chief Joseph, the younger promised to honor his father's request.

However, this was not to be.

In 1871, Young Chief Joseph took over as chief of the Nez Perce from his father, Joseph, the Elder.

In 1873, Chief Joseph negotiated with the federal government to ensure his people could stay on their land in the Wallowa Valley. But in 1877, the government reversed its policy, and Army General Oliver Howard threatened to attack if the Wallowa band did not relocate to the Idaho Reservation with the other Nez Perce. Chief Joseph reluctantly agreed.

Returning home, Joseph called a council among his people. At the council, he spoke on behalf of peace, preferring to abandon his father's grave over war. Too-hul-hul-sote, insulted by his incarceration, advocated war.

The Wallowa band began making preparations for the long journey, meeting first with other bands at Rocky Canyon. At this council too, many leaders urged war, while Joseph argued in favor of peace.

While the council was underway, a young man whose father had been killed rode up and announced that he and several other young men had already killed four white men, an act sure to initiate war.

Chief Joseph was pursued by 2000 Federal Troops under the direction of General Howard.  The Native Americans traveled over 1600 miles through Oregon, Washington, Idaho, Wyoming and Montana, all the while fending off attacks by the Federal troops.

Chief Joseph was disheartened.  The chiefs that had been with him had been killed, his people were sick and they were starving.

After surrendering and securing a promise that his people would be returned peacefully, Chief Joseph and many others were put in an unheated rail car and sent to Leavenworth, Kansas, to prison for eight months.

After that, they were sent to the reservation in Oklahoma for 10 years.

In 1879 Chief Joseph went to Washington, D.C. to meet with President Rutherford B. Hayes and plead the case of his people. Finally, in 1885, Chief Joseph and his followers were allowed to return to the Pacific Northwest, although many, including Chief Joseph, were taken to the Colville Indian Reservation far from both the rest of their people in Idaho and their homeland in the Wallowa Valley.

Chief Joseph died on September 21, 1904, and was buried in Nespelem, Okanogan County, Washington.

The Family of Chief Joseph

When the Nez Perce were first described by the white explorers Lewis and Clark in 1805, the Nez Perce lived in around seventy villages, each with several extended families. Their population was estimated to be 7,850 individuals. Prior to this, it is difficult to know how many Nez Perce lived at any given point in time. A hundred years earlier, it is likely that they had a larger population living in as many as 100 villages, but beginning in the 1780s, their population began to decline as European and Asian sailors landed and introduced new diseases into the region. The worst of these was smallpox, which spread up and down the Columbia River in the 1780s killing at least half of the native peoples living between the Pacific Ocean and the Rocky Mountains. Other diseases spread by water, air and contact with infected peoples’ clothing or skin further reduced the Nez Perce. Measles, mumps, chicken pox, and influenza or the common cold–“childhood diseases” that could also kill white children and adults, took many Indian lives causing disruption of normal patterns of life.


The Nez Perce had many close relatives, who spoke various dialects of the same language within the language family called “Plateau Penutian.” Some bands such as those at Kamiah and Kooskia in present-day Idaho were described as “upriver bands;” others closer to Joseph’s people were called “downriver people.” All spoke Nimipuutimpt, “Nez Perce.” Others within the same language family spoke a related dialect called Sahaptian. These included the Yakimas, Walla Wallas, and Palouse in present-day Washington State, groups along the Columbia River in present-day Oregon including the Umatilla (near Pendleton), and the Celilo (near The Dalles). Yet another group within the family spoke Klamath, whose homeland extended as far south as present-day northern California. 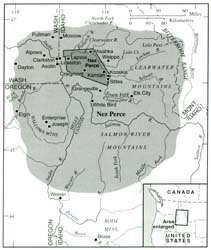 Map showing where the Nez Perce Lived
Some Nez Perce traveled beyond the region of their language family to hunt buffalo, to visit distant friends, and to trade. Their closest friends were other speakers of Sahaptian such as the Umatilla and Yakima along the Columbia River and its tributaries. They also had close ties with the Coeur d’Alene to their north in Idaho, the Salish and Pend d’Oreille of the Bitterroot and Mission valleys in western Montana (both named by the French and later called the Flathead Indians), and the Crow of eastern Montana and Wyoming.

Map showing Nez Perce in Relation to other Tribes
Chief Joseph, born as Hinmahtoo-yahlatkekht, was raised as a traditional Nez Perce in the village of In-nan-toe-e-in, one of seven children. His older brother, Sousouquee, his younger brother, Ollokot (meaning “Frog”) and his sisters were all close and important to Joseph.

Old Joseph (Tuekakas) died in 1871, having renounced Christianity and all treaties, at which time his people remained in the Wallowa Valley on their ancestral lands, but outside the “official” boundaries of the 1863 reservation. Hinmahtoo-yahlatkekht succeeded his father as chief of the Wallamotkin (or Wallowa) Band and was known thereafter as “Chief Joseph” by non-Indians. His older brother Sousouquee, remembered as taller than Joseph and equally handsome, had been dead six years, reportedly killed by other Indians. Now the eldest, Joseph was married to a Nez Perce woman known as Wa-win-te-pi-ksat, the daughter of another important Nez Perce band leader of the Lapwai area named Whisk-tasket. Their marriage produced one daughter named Kap-kap-on-mi, born in 1865. Joseph would later remarry to a woman remembered as “Springtime,” who also bore a daughter in 1877. During his life, Joseph had several wives and many children, some his own, others adopted into the family after their parents had died. 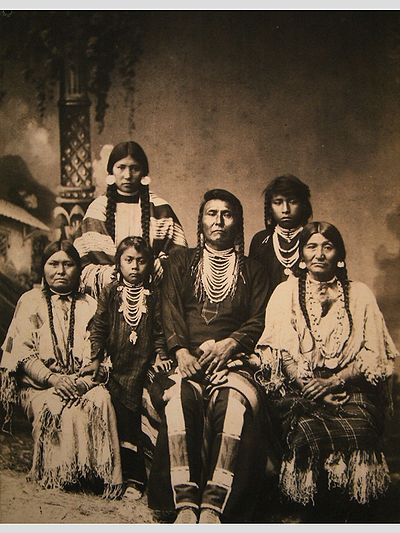 The Family of Chief Joseph
Photo 9: Chief Joseph with family during imprisonment in Kansas. Joseph is believed to have been thirty-nine or forty years old and the women are three of the total of four wives he would have during his lifetime. F. M. Sargent, photo artist, Anthony, Kansas, 1878 or 1879. Courtesy National Park Service, Nez Perce National Historic Site, Spalding, Idaho. Neg. # 128.

Chief Joseph's pedigree with children will appear. At this point you will be able to move around and see his ancestors and descendants. If you have trouble, contact your ward family history consultant.